JUNE ACKLAND GOT DRUNK ON THE JOB

Ackland? Reliable, wholesome, dependable June Ackland got bladdered while on duty? Indeed she did, and not while merely walking the beat either. She was undercover at a hotel, helping to protect a jury in a gangland trial. June ended up at the bar, and was targeted by a suave Spaniard who tried to persuade her to go back to his room. "Get on the first banana boat back home before I nick you," a drunken Ackland told him, proving she wasn't always a very PC PC. Then, adding to the embarrassment, her colleagues had to lock her in a sauna to sober up. The worst part was the disappointment in Bob Cryer's face as told her she'd "let the side down". Ouch.

TOSH'S WIFE HAD A MELTDOWN IN A BANK

We all know Tosh Lines as the beloved bloodhound of Sun Hill, but do you remember his wife? There was a very unfortunate moment when some officers were called to deal with a ruckus at a bank, only to find the source of said ruckus was Tosh's other half, who was loudly bullying the manager into giving her money - despite not actually having any in her account. "I'm not moving until this man gives me some money," Tosh's wife declared, clearly not quite understanding how banks, and personal finances, work. The seniors back at Sun Hill were worried about Tosh "washing his dirty linen in public", but laundry was the least of their worries when armed robbers then stormed in, taking everyone hostage.

Good old Bob Cryer was often taken for granted at Sun Hill. He was a low key sort of bloke with his own rigid moral code, and the demeanor of a slightly irritated supply teacher (and who could blame him, with some of the younger coppers he had to handle?). And yet, Bob had another side to him. A backside-kicking, gun-toting, Clint Eastwood side. When push came to shove, Bob could lay down the law like Dirty Harry - like the time he faced off against armed robbers, pulled out a pistol, and shot the perp down like a rabid dog. Blimey, we never knew we had it in him.

POLLY PAGE WAS DONE FOR MURDER

Yes, THAT Polly Page. The sweet, slightly hapless, heart-of-gold copper whose fresh face charmed all the men almost without her even noticing. She was literally sent down for murder, and all because of her tragic friendship with a doctor. Suffering a terminal illness, he chose to take his own life, and bafflingly involved poor Polly in his own euthanasia. When it was discovered he'd left money to Polly in his will, and her prints were found on a syringe, she was duly implicated in his death. A traumatic time for everyone at Sun Hill, although Polly was eventually exonerated on appeal. Phew.

Jim Carver was a Sun Hill legend, and we watched him grow from his very first day on the beat. The idea of him anywhere EXCEPT London just seems completely wrong to us, yet many will have forgotten that this stalwart of the Big Smoke actually got transferred up to Greater Manchester Police. Not that that was the last we saw of him, though. He made surprise re-appearances back on his old stomping ground, which was complicated. Not least when he and his ex-beloved June Ackland were both kidnapped by a drug dealer. Like that reunion wasn't going to be awkward at the best of times, eh?

Ah, Dave Quinnan. One of the foremost jack-the-lads at Sun Hill. A ducking and diving, wheeling and dealing sort of geezer, who was into the whole cop lark for the money and thrills, rather than the quaint notion of "making a difference". So it's no surprise that he had a dodgy thing on the side. What was it? Secret drug peddling? Money laundering on behalf of international arms dealers? Nope. His guilty secret was moonlighting as an electrician in his spare hours. Bless

Take a glimpse into the world of Sun Hill. #TheBill https://t.co/5U9iRLBrmi

TONY STAMP WAS THE WORST DRIVER IN SUN HILL

We probably shouldn't make light of this, because poor Tony Stamp really did suffer. But it's almost funny (in a very dark sort of way) that his police career was almost derailed by two separate driving disasters. The first was when he got a bit carried away during a car chase, reversed down a one-way street and ploughed into a pedestrian. Who died. Yes: died. Stamp was hauled up in court for a painful trial, but was found not guilty of death by dangerous driving... only to then knock someone else over a few years later. And not just any old someone else, but June Ackland, who almost perished. Now that's bad luck, even by Sun Hill standards... 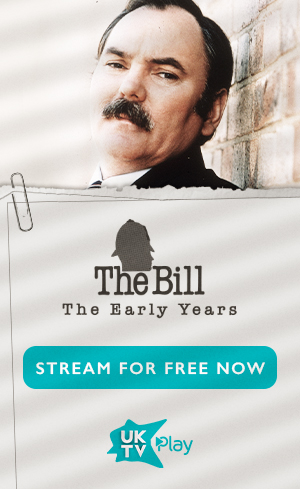 The record-breaking police drama follows those in blue from Sun Hill Police Station.

Take a trip down memory lane and witness 26 years of murder, famous faces, cops and crims.

Pip and Estella: two of history’s most famous characters. Immerse yourself in their story…